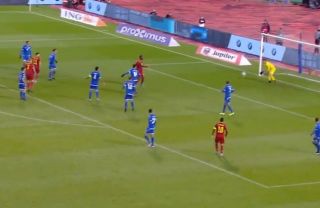 Belgium started to run riot in their encounter with Cyprus on Tuesday night as they were 4-1 up by half-time in their EURO 2020 qualifier.

Having already secured top spot in Group I, the Belgians were looking to make it 10 wins in 10 having now scored 38 goals and conceded just three during their qualifying campaign thus far.

They were certainly given a helping hand by Cyprus goalkeeper Neophytos Michael in midweek, as seen in the video below, as he made a horrible effort to keep Kevin De Bruyne’s scuffed shot out.

Cynics may question just how easily the shot-stopper let the ball go in as he somehow managed to fumble the tame effort from the Man City ace into the back of his own net in what was simply a gift for the hosts to restore their lead.

You’d probably be hard pressed to find worse goalkeeper than this, but De Bruyne and Belgium won’t mind one bit as they look to wrap up a 100% perfect qualifying run ahead of trying to go for a major trophy next summer.

Cypriot shotstopper Neophytos Michael fumbles one into his own net to gift Belgium the lead…#OptusSport #EURO2020 pic.twitter.com/uDuGvXWZz8