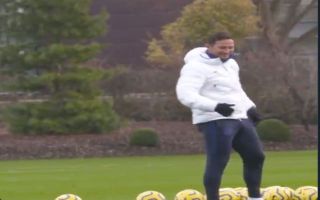 It’s always fascinating when you see a manager join in with his players in training and still looks good enough to play.

Obviously there’s the age factor to consider and the fact that they probably don’t have the legs to get around the pitch anymore, but it would be intriguing to see them play in a competitive match.

Frank Lampard was best known for getting box-to-box and scoring some screamers from the edge of the area, but this video from him in Chelsea training shows he’s still got a decent range of passing as well:

Frank Lampard at the heart of today’s training session as preparations for #MCICHE step up! ? pic.twitter.com/Kw2Sqtavtq

From the simple lay off, the dink over a defender or something a bit longer range, it’s all still there and accurate as you would expect.

In turn, not only can the Chelsea boss pass on his wisdom from the experience that he built up during his playing career, but he appears to still have the technical quality and class on the ball to have a hands-on approach in training too.

That can surely only help the development of his young players with the likes of Tammy Abraham, Mason Mount and Fikayo Tomori all getting chances to shine this season.

Video: Peter Crouch has fellow pundits in stitches as he forgets all about his Champions League record
More Stories Frank Lampard