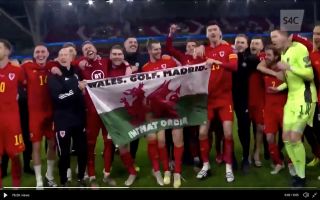 After Wales secured their qualification for next summer’s European Championships, Ryan Giggs’ side decided to celebrate whilst holding a hilarious flag that could land Gareth Bale in some trouble with Real Madrid.

The flag read: “Wales, Golf, Madrid… In that order” – a reference to criticism that’s come his way about playing too much golf in Spain.

According to BBC Sport, former Madrid striker Predrag Mijatovic slammed the winger by claiming that he prioritises Wales – and even golf – over his club.

It’s not confirmed where this flag came from, but Wales fans hung up something that looks exactly the same for side’s previous clash against Azerbaijan.

Take a look at Bale’s celebrations that are certain to spark controversy below, courtesy of S4C:

We imagine this is NOT going to go down well with Zinedine Zidane or Bale’s Madrid team-mates.

Bale, however, may not be at the Bernabeu for much longer after being strongly linked with a January transfer Manchester United.

Here’s Bale and Wayne Hennessey spotting the flag in the crowd. Absolutely loving it ?pic.twitter.com/CctegY9Q37