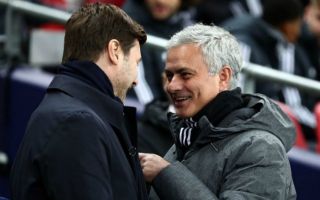 An old Jose Mourinho quote has been dug up about previous links with him and the manager’s job at Tottenham.

According to the Daily Mail, Mourinho spoke in 2015 about rejecting Spurs in 2007 because he cared too much about the fans at his first Premier League club Chelsea.

MORE: Video: Frank Lampard shows off his range of passing during Chelsea training

“I would not take the job because I love Chelsea supporters too much,” he is quoted by the Mail.

The Portuguese tactician has today been announced as Tottenham’s new manager to replace Mauricio Pochettino, so clearly he no longer takes the feelings of Blues supporters too seriously.

Mourinho had two spells in charge at Stamford Bridge, winning three league titles and numerous other honours in his time in west London, but is now set to take charge of one of their major rivals.

Pochettino’s dismissal was announced last night before Mourinho was quickly confirmed as the Argentine’s replacement early this morning.

Mourinho’s last job was at Manchester United, so perhaps Chelsea fans have already come to terms with the fact that their former hero has no real qualms about managing their rivals.