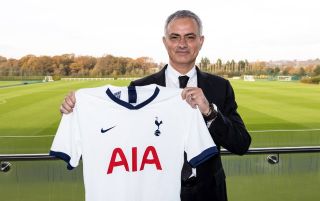 It won’t come as a huge surprise to anybody that Jose Mourinho has started has time in charge of Spurs by trying to take shots at his former employers. He’s failed in his past three jobs so he needs to do something to make it look like it wasn’t his fault.

It’s well known that he doesn’t like to produce youngsters for the first team, apart from Scott McTominay. He’s always been a manager with favourite players and tends to rely on experienced players that he can control and behave in a predictable way on the pitch.

The Mirror has reported on some of Mourinho’s comments from his first Spurs interview. He seemed to be trying to suggest that it wasn’t his fault that he has no track record of bringing young players through.

Here are some of his key comments:

“The problem is that sometimes you get into clubs where the work that is below you is not good enough to produce these players.”

“So I look to our history and you see that the academy is always giving talents the first team need. Of course I always look forward to working with that profile.”

It raises two interesting points. Firstly it’s a fairly obvious dig from Mourinho at his former employers, only it looks like he’s wrong. Man United and Chelsea have brought through a lot of talented young players in the past few years. United also brought through youngsters before he arrived, so that argument is nonsense.

The second point could be fascinating. This does suggest that he will try to bring through some young players at Spurs, so could it be the case he won’t get to spend as much money as he has done at previous clubs?

It will be fascinating to see how this goes for him. If Mourinho fails again then his stock will seriously start to plummet, so he needs to get off to a fast start. That suggests he might not have time to start blooding some of the youngsters.