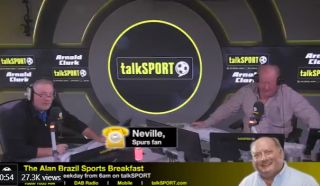 Tottenham fans are not a happy bunch today, though we’re not sure many would go as far as this guy did when he called up talkSPORT.

Watch the clip below as this distraught Spurs fan hits out at club chief Daniel Levy following the decision to sack Mauricio Pochettino and replace him with Jose Mourinho.

? “I’m never going again while that man Daniel Levy is in charge!”

? “I hope Pochettino goes to Arsenal and wins the league. I am that gutted.”#THFC fan is so angry at Poch going…

…. He wants him to go to Arsenal and win the Premier League title now ? pic.twitter.com/RZnfFVg4Qw

It’s fair to say the decision to hire Mourinho is going down particularly badly, and this Tottenham fan now wants to see Pochettino go and prove Levy wrong in the worst way imaginable.

Yes, he genuinely wants to see the Argentine take over at north London rivals Arsenal and win them the Premier League title.

For once, Gooners and Spurs fans may now have something in common…