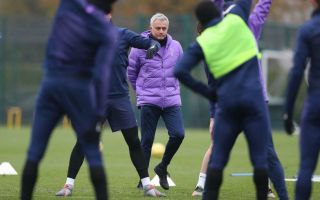 Jose Mourinho is reported to have surprised some of his players on his first day as Tottenham manager.

The Portuguese tactician is back in Premier League management again after a spell away from the game since he was sacked by Manchester United last December.

MORE: Why Arsenal job did not appeal to new Tottenham manager Jose Mourinho

Shortly after the sacking of Mauricio Pochettino, Mourinho was announced as the new Spurs manager on Wednesday morning.

Known for being one of the game’s real characters, it’s fair to say the former Man Utd and Chelsea boss’ reputation has perhaps taken a turn for the worse after difficulties in his last few jobs.

Things ended badly for him at Real Madrid, his second stint at Chelsea, and then at United last year, but it seems he’s taken people by surprise at Tottenham.

According to the Evening Standard, the new manager surprised players by how engaging he was as he took the time to speak to every one of his new players individually, as well as giving a talk to the group as a whole.

Spurs fans will now be hoping Mourinho can surprise them too, with his appointment in the place of the extremely popular Pochettino not initially going down too well.