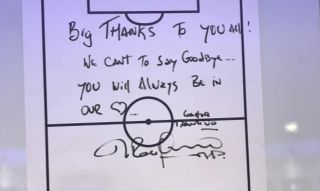 Tottenham fans are getting emotional after this tweet from their former coach Jesus Perez.

It’s fair to say most Spurs fans were not too happy with their club’s decision to sack Mauricio Pochettino as manager this week.

Jose Mourinho has since been confirmed as the Argentine’s replacement at Tottenham, but Perez got loads of fans emotional with this goodbye message…

Pochettino can be seen writing his goodbyes on the tactics whiteboard, which was signed by Perez and other members of his backroom team.

Here’s some of the reaction from Spurs fans…

This feels me with so much warmth , I wish Poch the absolute best in the future ???