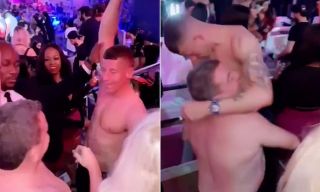 Chelsea ace Ross Barkley may have some questions to answer this week after photos emerged of him topless in a Dubai nightclub over the international break.

The 25-year-old has been a key part of Frank Lampard’s plans so far this season as he’s made nine appearances across all competitions.

However, he has been sidelined by an ankle injury in recent weeks and with several of Chelsea’s youngsters impressing this season as well as some of the more senior stars, it remains to be seen whether or not he’ll be able to claim a starting berth when he returns.

This probably won’t help his cause though, as the Daily Mail report how the England international was seen dancing topless and looking ‘worse for wear’ in a Dubai nightclub over the international break.

It’s worth noting that the report adds that Barkley wasn’t misbehaving and was simply just having a good time, and so from that perspective it could be argued that he shouldn’t need to face scrutiny.

Nevertheless, Lampard may not be impressed with what he sees in the report and he’ll surely demand that his Chelsea players conduct themselves in a certain way with class and respect on and off the pitch.

The Mail go on to note that Lampard has already played down an incident with Barkley this season, and so he surely won’t be too happy about having to defend him again and speaking about his antics off the pitch when he simply will want to focus on what he can offer on it.

Time will tell if anything comes of this, but Barkley probably won’t want to be seeing these photos again too often. Fortunately for him though, it doesn’t appear as though he faces a fine after a list of costly infringements at Chelsea went viral this week as seen in the tweet below…

Swear man can we sell this scrub in January already ffs, average footballer who isnt serious

When we got players like Gilmour & Gallagher who got more ability & genuinely want to play for ushttps://t.co/9ui8KvWBUP