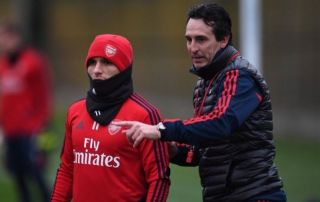 The Uruguayan international has made 65 appearances for the Gunners since joining them from Sampdoria last summer on a transfer fee reported to be £26 million by BBC.

This season, Torreira has featured in 15 matches for Arsenal, scoring twice against Liverpool. However, he has made only four starts in the Premier League so far.

Emery said that he spoke with the 23-year-old regarding his current scenario at the club and has urged him to improve on his performances. As quoted by Goal.com, the Arsenal manager said: “I spoke with him on Wednesday and Thursday. He is young, his process here is starting. He started playing in the Premier League last year and he progressed, but this year again he needs to progress.

“He is a very good player, important for us, and his focus needs to be with us 100 per cent. His response to me was positive. Lucas has very big commitment and very good behaviour. He has a very big future here but he needs to improve. He has to learn in some situations, individually to help us, to do better.

“This year he’s not being consistent but my challenge to him is to improve, to do better with some tactical issues on the pitch and above all be consistent and take consistency into the next matches.”

With the possibility of Granit Xhaka featuring in upcoming fixtures looking very slim, there’s a good chance Emery will give more starting opportunities to Torreira and he’ll be needed to be at his best if Arsenal are to turn things around. The Gunners play Southampton today and a win could take them to fifth place in the Premier League table provided Sheffield United are unable to beat Manchester United tomorrow.