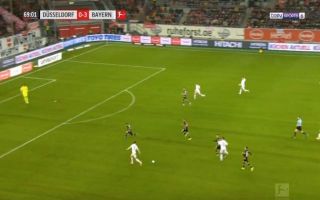 It would be a bit of a push to say that Bayern were in crisis under Niko Kovac, but results were unpredictable and it did look like they may struggle to retain their Bundesliga title.

Kovac was eventually sacked after a humiliating 5-1 defeat against his former club Eintracht Frankfurt, but there’s been a bit of a revival since then. They triumphed over Olympiacos in the Champions League and now have back-to-back 4-0 victories in the league.

The second of those came away to Dusseldorf earlier on today, and Barcelona loanee Philippe Coutinho manged to seal the victory with this strike from close range:

It’s not the greatest goal he’ll ever score, but it’s great to see Thomas Muller being the player at the front post to disrupt things and let the ball run through to the Brazilian. Muller was frozen out earlier in the season but looks to be an important player again.

We saw exactly what Coutinho could do during a fantastic spell with Liverpool, he regularly ran the midfield and was known for spectacular goals. It didn’t work out at Barcelona, but he’s starting to find form again since making the loan move to Germany.

It’s widely thought that Bayern have the option to make his move permanent, it will be interesting to see if they decide he’s worth it.