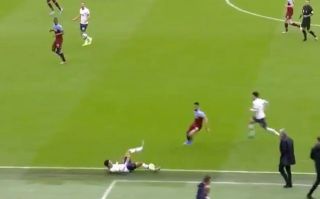 Tottenham took a 2-0 lead into the half-time interval at West Ham on Saturday with Lucas Moura putting them in control just before the break.

Heung-Min Son had given the visitors the lead over the Hammers after a relatively cagey opening to the encounter, but Spurs began to take control.

After a brief break in play following an injury issue for West Ham defender Angelo Ogbonna who was wiped out by his own goalkeeper, Tottenham were more alert than their rivals as they broke in attack quickly.

However, they’ll owe a big debt of gratitude to Dele Alli for keeping the move alive as he found himself on the ground on the touchline, but somehow managed to flick it into Son’s path to keep them moving forward, as seen in the video below.

The Spurs forward then put in a brilliant cross to give Moura a chance at a relatively simple finish, and the Brazilian obliged to beat Roberto and put Jose Mourinho’s side in a commanding position to pick up all three points in his first game in charge.

Son puts it on a plate for Moura after Dele Alli's ingenious flick ? pic.twitter.com/VKy46GbbyM

A flick from sitting on his backside sets up Spurs second, and they're cruising now!