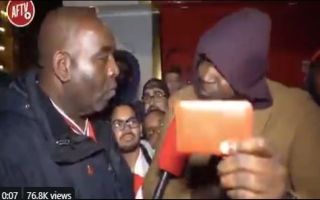 It really does show how badly things are going for Arsenal when they needed a late goal to salvage a point at home to Southampton. This is the same team that lost 9-0 to Leicester not that long ago.

You have to think that Unai Emery needs to go after this one. It’s not just the results, the energy seems to being sucked out of Arsenal and the fans have clearly turned on him.

AFTV ( formerly known as Arsenal fan TV ) has thrown up some “interesting” content in the past. This is actually one of the funnier moments, as a fan throws his season ticket away in disgust:

AFTV is the gift that keeps on giving ???pic.twitter.com/bzidj5ybeL

What makes this particular clip particularly funny is the sudden way he just launches the thing over his shoulder.

It’s changed days where you used to have a book full of tickets, it’s likely that he’s just thrown away an electronic card that will still be perfectly usable. He will end up getting it back in the post in the next few days, but it was fully worth it for the effect.