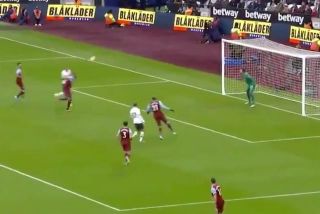 Tottenham were in full control of their encounter with West Ham on Saturday with Harry Kane putting them 3-0 up before the hour mark.

Jose Mourinho took charge of his first game as Spurs boss, and after early warning signs were seemingly ignored by the Hammers, the visitors began to find their goalscoring touch in the final third.

Heung-min Son was the first man on target before he turned provider and set one up for Lucas Moura to double Tottenham’s lead before half-time.

They didn’t take long to find a third and it was Harry Kane who got it, and as seen in the video below it was a lovely headed finish as he rose highest and drove his effort down into the ground before it beat Roberto to nestle into the back of the net.

That’s now 175 goals for Tottenham but his first under Mourinho, and the Portuguese tactician will certainly hope that there are plenty more to come from him as he looks to guide his new club up the Premier League table quickly from their lowly 14th spot ahead of kickoff.

Dream start for Mourinho and Tottenham, Harry Kane makes it 3?!

Catch the rest of the second half on NBCSN, or, stream it here: https://t.co/2N26i9Oa45 pic.twitter.com/CW9cHu4J7W

It's a perfect start for the new Spurs manager: 3-0 up, five minutes into the second half!

The first of many for Harry Kane under Jose Mourinho? #WHUTOT pic.twitter.com/YauFyUFRlT