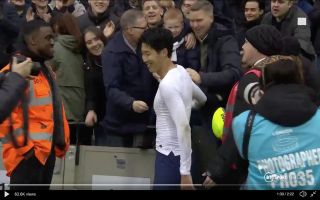 The 27-year-old forward went over to fans and decided to hand a young supporter his match shirt. The star scored the first goal of Mourinho’s reign in the 36th minute of the clash.

It is gestures like this from the attacker that make him loved by football fans across the whole world.

The South Korean’s wonderful gesture was captured by BT Sport a the 1.25 mark of this video:

"They look like a Jose Mourinho team after one game."

"They are going to be a MASSIVE threat over the next few years!"

The new Spurs chief claps his fans and congratulates his players after a winning start ? pic.twitter.com/tvNssiXddD

Son is a class act.