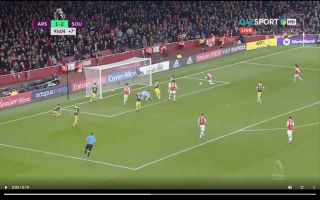 Alexandre Lacazette rescued Arsenal in the final minute of their Premier League clash with Southampton this afternoon.

Captain Pierre-Emerick Aubameyang aimed a brilliant header into the path of eventual super sub Gabriel Martinelli, the Brazilian starlet beat his man before aiming a cross towards the back post.

Lacazette was left in enough space to control the ball and poke it into the back of the net to rescue a point for the Gunners.

Check out the Frenchman’s last-minute leveller below:

Lacazette’s crucial double this afternoon may well have kept Unai Emery in a job. A side that came in as nailed-on relegation candidates were moments away from sealing a shock win.