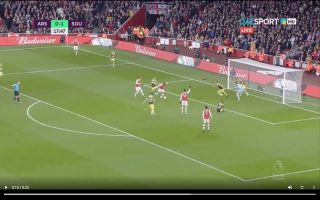 In the 17th minute of this afternoon’s Premier League clash between Arsenal and Southampton, the Gunners charged forward with some lovely team play before scoring.

Summer signing Kieran Tierney galloped down the left-flank before launching a dangerous cross into the box which was met by Pierre-Emerick Aubameyang.

The captain’s effort was blocked by Ryan Bertrand, but strike partner Alexandre Lacazette was first to react to the loose ball and took a touch before poking it into the back of the net.

Take a look at the Frenchman’s equaliser below:

Lacazette showed off some killer instinct to draw Arsenal level. Will Unai Emery’s men get the win this afternoon?