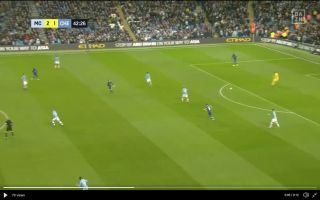 Chelsea’s Kepa Arrizabalaga was incredibly lucky to not cost the Blues a goal after a shocking error in this evening’s mammoth clash with Manchester City.

In the 42nd minute of the clash, Kepa drilled the ball directly to Sergio Aguero and the Premier League talisman somehow missed a glorious chance to extend City’s lead.

The Guardian reveal that the Blues paid a world-record fee for a goalkeeper of £71.6m to bring the Spaniard in from Athletic Bilbao.

The 25-year-old hasn’t been as good as he was last season, he seems to be making regular errors as a result of his willingness to play out from the back.

The MailOnline even recently revealed that Frank Lampard was exploring the idea of adding Shay Given to his coaching staff to help the struggling stopper.

Check out the Spaniard’s almost costly error below:

Here’s how some Chelsea fans reacted to the 25-year-old’s mistake:

Playing around the back & being lazy while at it. We pracically gifted city their goal

Kepa can’t be our number one keeper, he is extremely awful. I don’t rate him in any way.

His whole game has been bang average.

He really needs to get his act together

Should Lampard encourage the star to avoid playing out of the back from now on?