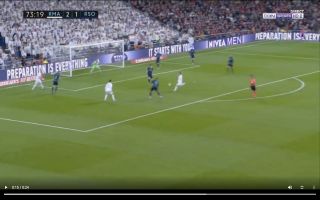 In the 73rd minute of this evening’s La Liga clash between Real Madrid and Real Sociedad, Gareth Bale played a dangerous cross into the box – whilst being booed by some Los Blancos fans.

The Welshman’s delivery was headed down by Karim Benzema into the path of Luka Modric and the midfield maestro launched a stunning half-volley on goal.

The goalkeeper had no chance of stopping this effort.

Take a look at the Croatian star’s goal below:

Valverde, Bale, Benzema and Modric in that order lol
What a beautiful pass from karim and an even more beautiful finish by luka #RMARSO pic.twitter.com/LHIvi6z3SI

Zinedine Zidane’s men managed to take control back in the game despite going behind very early on. Los Blancos are now level with their rivals Barcelona on points.