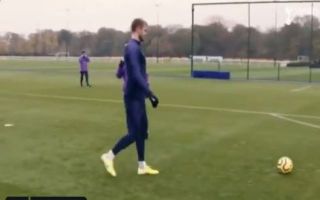 We’re still living in that honeymoon period where Jose Mourinho has arrived as the saviour of Tottenham with the players seeming delighted and some optimism among the fans.

Give it a couple of weeks and he will be complaining the squad isn’t big enough, there’s not enough money to spend and the young players are nowhere near good enough to play in the first team.

One thing that has transpired is the quality of free kicks in training, this video shows a pretty impressive effort from Eric Dier:

Jose Mourinho has been at Tottenham for less than a week and Eric Dier suddenly turned into Juninho. ??? pic.twitter.com/qcrx9wb6jv

Jose Mourinho has been at Tottenham for less than a week and Eric Dier suddenly turned into Juninho Pernambucano ??? pic.twitter.com/YPzHLOdeWh

The claims that he’s turned into Juninho are a bit far fetched, but he could become an important player under the new manager.

He seems like exactly the kind of player Mourinho loves in the midfield, he’s big and can anchor the midfield, without doing anything fancy so he knows he can rely on him.

Plus he might be handy from free kicks around the box.