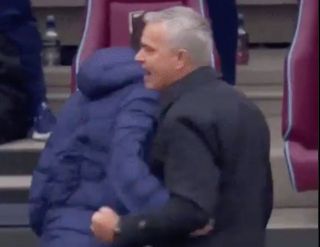 Jose Mourinho took charge of his first game as Tottenham boss this weekend, and he was pumped after Heung-Min Son gave them the lead at West Ham.

The Portuguese tactician has been out of work for almost a year after leaving Manchester United last December, and while he has kept busy during his time away with punditry work, he will no doubt be delighted to be back coaching.

It appears as though he is set to make a positive start to life at Tottenham as they were 3-0 up at West Ham before the hour mark, as they look to secure all three points in his first game at the helm.

As seen in the video below though, Mourinho was pumped after Son broke the deadlock as he celebrated with his coaching staff to show that he is most certainly determined to make a success of his latest challenge.

Time will tell if this is just an immediate reaction to a managerial change or a more permanent upturn in form for Spurs, but for now, Mourinho and his new players have certainly produced the goods as they put themselves in a commanding position to take home all three points.

José Mourinho reacts to the first goal of his #thfc tenure. pic.twitter.com/OlD3brUdaM