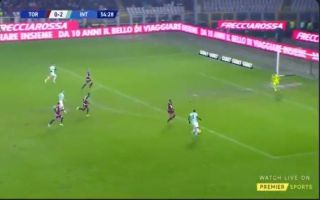 It’s probably a sign of how the form of Marcus Rashford has lifted the mood around Manchester United fans at the moment. It wasn’t long ago that every Romelu Lukaku goal was greeted with dismay and fans bemoaning the decision to sell him.

It’s not to say that he wouldn’t improve Ole Gunnar Solskjaer’s squad. He’s certainly found his goal scoring form again in Serie A for Inter Milan.

READ MORE: Wags may be in for a bad time as Antonio Conte dishes out SEX TIPS to his Inter Milan players

He showed great persistence and prolific instincts to put his side 3-0 up away to Torino tonight:

? That’s a 1?0?th league goal of the season for the Belgian marksman pic.twitter.com/0HM7uLR6Cx

The Belgian has now reached double figures for league goals already this season, so it certainly looks like he made the right choice in moving. It’s also possible that Antonio Conte knows how to adapt his system to get the best out of him.