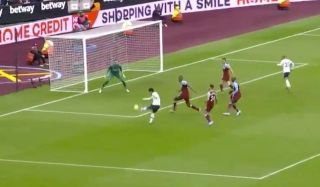 Heung-min Son scored the first goal of Jose Mourinho’s tenure as Tottenham boss as they look a first-half lead at West Ham on Saturday.

Spurs looked dangerous early on with Dele Alli and Harry Kane linking up well, only for the latter to see his goal ruled out for offside.

The hosts started to come into the game and became more of a threat, but neither side could find a breakthrough in the early stages.

However, the deadlock was eventually broken by Son, who as seen in the video below, showed great close control to create space for himself in the box and in turn managed to get a shot off.

That said, question marks will perhaps be raised over West Ham goalkeeper Roberto who appeared to make a weak attempt at saving the effort with the shot fairly close to his body.

Unfortunately for West Ham, he couldn’t keep it out and Son was able to spark a celebration for Mourinho on the touchline as his side took the lead in his first outing as Tottenham boss.

The first goal of the Jose Mourinho regime! ??

Son powers it home as Tottenham take the lead ? pic.twitter.com/UhtiueImcU

The Mourinho era has begun ? pic.twitter.com/AX84yPc5CI

? The first Spurs goal of the Mourinho era! ?

And from who else but Son Heung-min!