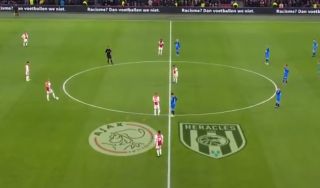 Ajax and Heracles staged a classy on-pitch protest at the start of their game yesterday.

Watch the video below as the two clubs took a stand against racism by not kicking the ball for the first minute of their match.

Ajax and Heracles didn’t kick the ball for the first minute of today’s league match in protest at racism.

This follows recent racist chanting towards Excelsior’s Ahmad Mendes Moreira, and it’s nice to see other Dutch clubs stand with him in solidarity.

There is no place for racism in football or society as a whole, and it would be nice if more clubs could stage protests like this and do what they can to encourage FIFA and UEFA to take stronger action against teams whose fans are guilty of xenophobic chanting.