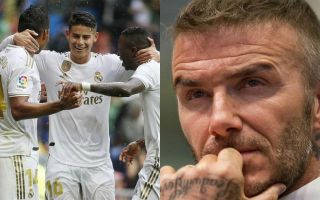 The MLS club will no doubt be looking to start with a bang with some big-name signings, and it looks like Rodriguez is one of their main targets.

According to Don Balon, Inter Miami could try offering the Colombia international close to double his current wages, upping his salary to around £10.7million a year, up from £6m.

This kind of money is sure to turn plenty of heads, even if a talent like Rodriguez might also feel he still has something to offer in a more competitive league.

The 28-year-old has looked a world class performer at various points in his career, though it’s fair to say he’s not looked too close to that level for some time now.

James Rodriguez is a rumoured transfer target for Inter Miami

It’s been a difficult spell for Rodriguez at the Bernabeu, though he showed some signs of improvement during a loan spell with Bayern Munich, even if it wasn’t enough to result in the transfer being made permanent.

At this point, it might well be the best move for Rodriguez to accept the big money and move to the MLS for the latter stages of his career.