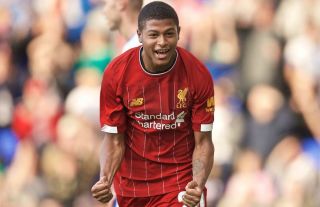 The 19-year-old has made two appearances for the Reds this season, both of which have come in the Carabao Cup. He was an unused substitute in three other matches for Liverpool.

Brewster has made nine appearances for the club’s reserve and youth sides, scoring five goals while providing an assist.

According to the Mirror, a few clubs are interested in signing the teenager but Aston Villa are the frontrunners. The report also claims that the other clubs interested in landing Brewster include Swansea, Leeds United and Crystal Palace.

Liverpool already have the likes of Salah, Mane and Firmino upfront so it’s highly unlikely that Brewster will receive much first-team opportunities. At this stage, a loan move to some other club would be pretty useful for the striker as he could get more game time.

Brewster might not be much of a regular for Aston Villa but he should receive more first-team opportunities there than at Liverpool.