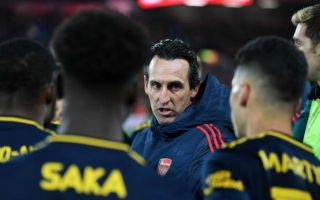 Arsenal manager Unai Emery has been ripped to shreds by a source inside the Emirates Stadium after the team’s poor form continued against Southampton.

The Gunners were once again second-best in a game they should be dominating as they drew 2-2 at home to the Saints in the Premier League this weekend.

Emery has been blamed for failing to take this team forward, with an Arsenal source comparing him unfavourably to a more proven winner like Jose Mourinho.

The source also added that managers like Frank Lampard and Brendan Rodgers have already built teams with more identity despite being in their respective jobs at Chelsea and Leicester City for much less long.

“The problem is the coach,” an Arsenal source told the Telegraph. “He still makes bad decisions and changes his tactics.

“There is no identity to the team and the players do not see any progress.

“The recent performances and results have had a big impact on the belief of the squad. Does anybody still think they can qualify for the Champions League under the coach? I don’t think so.

“Mourinho taking over at Tottenham has only made it worse. He may not be to everyone’s liking, but he is a winner and Spurs have made it clear they want to win.

“Unai Emery is not seen as a coach on the same level as [Pep] Guardiola, [Jurgen] Klopp or even Mourinho. Frank Lampard has already built an identity at Chelsea and Brendan Rodgers is doing very well at Leicester. All of this puts more pressure on him.”