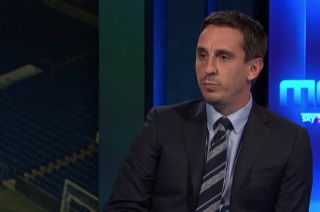 Gary Neville didn’t pull his punches when analysing Man Utd’s draw with Sheffield Utd this past weekend as he picked out three players for criticism in particular.

In a thriller encounter at Bramall Lane, the Red Devils fought back from being two goals down to take a 3-2 lead after scoring three goals in seven minutes.

However, they couldn’t hold on to complete a memorable comeback win, as the hosts found an equaliser in added time to ensure that the two sides shared the spoils.

After it took Man Utd time to get going in attack, Neville noticed a key issue with the attacking trident deployed by Solskjaer, as he slammed Marcus Rashford, Anthony Martial and Daniel James while analysing the game on Monday Night Football on Sky Sports.

“The lack of movement from Martial, Rashford and James is a joke,” he said. “It really is an absolute joke. All game. Nothing at all from them.

“When I first broke into the team I had people setting the standard and left you knowing where to go.

“Mata is on the bench, Pogba is injured, Matic is looking to get away, the experienced players at the club at this moment in time are in turmoil.

“They haven’t got futures at the club, some are injured. Essentially they are all out on that pitch, young, together.

“They don’t know how to approach a Premier League away game. They don’t understand how it’s different from Old Trafford. They haven’t got the experience or maturity.”

Neville went on to insist that Solskjaer would have to go out and add that in the January transfer window, but time will tell if the money is available and the right targets are on the market.

It’s difficult to disagree with his points above, especially on the United front three especially after he used clips to back up his point with the trio doing little off the ball to give their teammates an option or to put pressure on the Sheffield Utd backline.

In turn, Solskjaer will perhaps use that same point to help his youngsters improve and show them where they are still not contributing enough to the team, and time will tell whether or not that’s addressed moving forward.