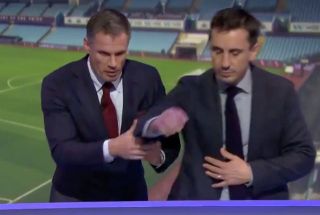 It feels like it’s been a while since we’ve had Gary Neville and Jamie Carragher on Monday Night Football together, but the pair were reunited this week.

On duty for Sky Sports to analyse Aston Villa’s clash with Newcastle United, the pair continued their fascinating and entertaining work well after the game using the technology at their disposal.

As seen in the video below, they even managed to start bickering over the use of the MNF screen, with Carragher physically removing Neville from being in charge to try and make his own point.

It didn’t appear as though it was particularly appreciated by the Manchester United legend who shook his head and closed his eyes at one point, but the pair have their own special brand of banter and it was entertaining to see it on show again this week.

That aside, they brilliantly dissected the weekend’s football and discussed key talking points from various games while also offering some excellent and informative insight with their thoughts of some major decisions including Jose Mourinho’s arrival at Tottenham.

In turn, it was great to have them back together on our screens, and naturally it wouldn’t have been a usual show without some hilarity from the pair to go with it…