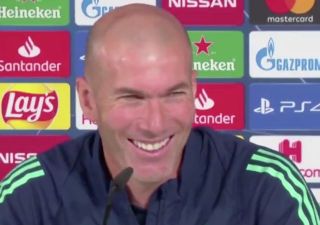 Whether he’s trolling Paris Saint-Germain on purpose or not, Real Madrid boss Zinedine Zidane is arguably risking another backlash from Leonardo after commenting on Kylian Mbappe again.

As seen in the video below, Zidane was again discussing the French international with the media, although it was surely a natural topic ahead of their clash with PSG in the Champions League on Tuesday night.

SEE MORE: Zidane sends message to the Real Madrid fans over their treatment of Gareth Bale

However, given PSG sporting director Leonardo has already hit out at the Real Madrid boss for commenting on a player at his club, as noted by the Daily Mail, Zidane is seemingly taking a big risk of infuriating their European rivals all over again.

It seems as though the French tactician hasn’t heeded that warning to stop talking about Mbappe, as he was at it again this week as this time he conceded that he is “in love with him”, as per the video below.

Zidane couldn’t stop himself from laughing during most of his answer to the reporter, while he ended by refusing to comment on the player’s possible wishes moving forward as he noted that he is a rival for now and that he “can’t say anything else”.

Time will tell if that leads to a frosty meeting between club officials this week and whether or not Leonardo comments on Zidane again through the media, but it will no doubt continue to keep speculation alive about a possible switch to Real Madrid for Mbappe at some point in the future.

At least for this week though, he’ll be fully focused on helping PSG secure all three points at the Bernabeu.