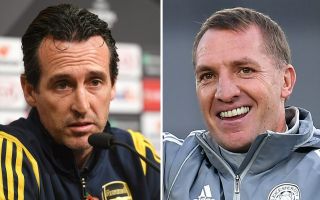 The Colombia international has had a difficult few years, having fallen out of favour at the Bernabeu before a fairly underwhelming two-year loan spell at Bayern Munich.

Now back in Madrid, it makes sense that Rodriguez might not be there for much longer, and Don Balon now link Leicester as one of his new suitors, with Brendan Rodgers’ side said to be willing to pay €40million to secure his signature.

The Foxes would do well to attract such a big name to the King Power Stadium, though it perhaps seems unlikely he’d necessarily jump at the chance to accept this move.

Leicester currently look strong challengers for a Champions League place for next season, and being able to offer Rodriguez the chance to play in Europe’s top club competition could no doubt be useful.

Some would argue, however, that it’s a bit of a risk for Leicester to potentially spend big on a player whose best days might well be behind him.

That said, Don Balon have also recently linked the 28-year-old with Arsenal, so it might be that some big clubs still fancy getting the player back to his best.

On his day, Rodriguez can be a joy to watch and provide moments of magic to decide games.

Still, it’s been some time now since he’s done that consistently, so it would be interesting to see how he’d fare if he did end up making a move to the Premier League.