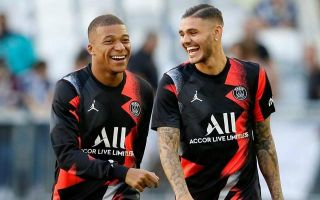 Liverpool are reportedly interested in a potential transfer swoop for Paris Saint-Germain superstar Kylian Mbappe, though they are aware it may be unrealistic.

This is according to a report from the Telegraph, which also explains the Reds’ interest in Borussia Dortmund winger Jadon Sancho, who would no doubt be a fine alternative.

The Telegraph claim Liverpool manager Jurgen Klopp could use his connections at former club Dortmund to get a good idea about Sancho’s potential interest in a move to Anfield.

It is reported in the piece, however, that Manchester United are confident they’re the favourites for the exciting young England international.

Liverpool fans will be pleased to see their club dreaming big with interest in Mbappe, with the France international looking like being arguably the stand-out player of his generation.

Kylian Mbappe is something of a dream transfer target for Liverpool

It remains to be seen if Mbappe could be persuaded to move to Liverpool, however, who, until recently, have not been as consistently successful as European giants like Real Madrid and Barcelona.

Still, Klopp led the Merseyside giants to Champions League glory last season and has turned them into Premier League title favourites this term.

LFC fans, however, would probably also be perfectly happy with Sancho as an alternative, with the 19-year-old looking a fine fit into Klopp’s style of play.