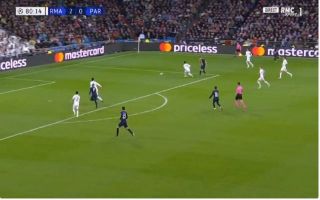 There’s been moments tonight where this whole game has felt like an audition for Kylian Mbappe ahead of a potential move to Real Madrid.

It won’t go down as one of the finer goals in his career, but scoring at The Bernabeu will only help to spur the Spanish press into action and demand that Real sign him next Summer.

It’s pretty shambolic defending from Real, but Mbappe shows good instincts to pounce and get his side back into the game:

They were able to go on and level the game minutes later, so it’s another decisive contribution from the young star. It will also allow PSG to add a few extra pounds to his price tag too.