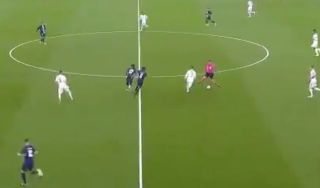 Real Madrid were in action against Paris Saint-Germain in a crunch clash in the Champions League on Tuesday night and they drew first blood at the Bernabeu.

Although their place in the knockout stage is secure after Galatasaray failed to win in the earlier kickoff, Los Blancos will still be in the hunt for top spot in Group A.

In order to snatch it from PSG, they’ll need to win this week as they sat five points adrift of the French giants ahead of kickoff.

With that in mind, it would have been crucial for Zinedine Zidane’s side to open the scoring, and they did just that thanks to Karim Benzema who produced a smart finish after Isco’s effort hit the post.

However, as seen in the video below, Eden Hazard was instrumental in the build up to the goal and he even had time to nutmeg the referee, although the official does give him a helping hand by jumping over the ball to allow him to pass through without interfering in play.

Nevertheless, it’s a crucial contribution from the Belgian international as he looks to be gradually improving and becoming more influential for Real Madrid following his summer switch from Chelsea, and it appears not even the referee could stop him on Tuesday night.

This man really nutmegged the referee while at it ?pic.twitter.com/a27AoI10Z2