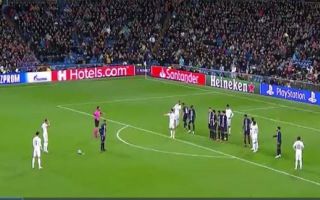 The Real Madrid fans are a pretty fickle bunch, they might jeer at you, but you can be pretty sure that scoring a stunning last minute winner would shut them up.

Gareth Bale has been targeted by the fans ever since he produced that flag on international duty. He was jeered during the warm up and when he came on at the weekend, so it would be best for everyone if they could move on and focus on supporting the team.

With tonight’s game against PSG poised at 2-2 in the final minute, he did this:

If that goes in then everything’s forgotten and he would’ve been the hero yet again. It would also have papered over the cracks of his teammates throwing away a 2-0 lead at home.