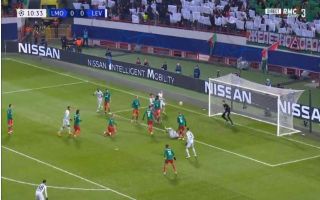 This seems exactly the type of goal that would happen on Fifa, you can almost picture the controller going through the TV as it happens, followed by complaints over how unrealistic everything is.

Both Bayer Leverkusen and Lokomotiv Moscow know if they can win and hope Juventus beat Atletico Madrid, then things could be interesting for them them going into the last round of fixtures.

READ MORE: Video: Keeper scores from his own box after the opposing goalie came up for a corner

The Russians were probably hoping to avoid conceding any goals when someone thumps the ball off one of their teammates who makes zero effort to get out the way:

Thankfully Lokomotiv do still have most of the game left to try and get themselves back into the game, but that could be a tough goal to recover from mentally.