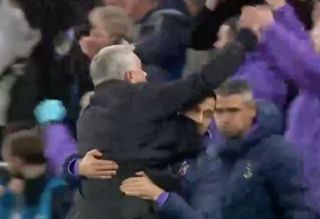 Tottenham found themselves 2-0 down against Olympiacos in the Champions League after just 19 minutes on Tuesday night, but they came roaring back to turn it around.

Jose Mourinho took charge of his first home game after starting his tenure with a win at West Ham this past weekend, and he would have been desperate to follow that up with another three points in Europe.

It didn’t look like things would stick to the script as their poor defending was exposed early on and the visitors raced into a lead.

However, crucial goals either side of half-time brought Tottenham right back into it and as seen in the video below, Serge Aurier bagged the third to complete the turnaround before Harry Kane added a fourth to put the Premier League side in full control.

Unsurprisingly, Mourinho was delighted with the reaction that he got from his players and it showed in his celebrations after Aurier’s goal went in, as seen below.

While he has obvious ties to the likes of Chelsea and Manchester United from his previous stints at those clubs, there is no doubting his passion and determination to now be a success with Spurs.

The reverse angle though ? pic.twitter.com/ZIvrrIS4PF

Where are the Mourinho haters now! Take that!!!! ??? pic.twitter.com/usYsW1WhJY