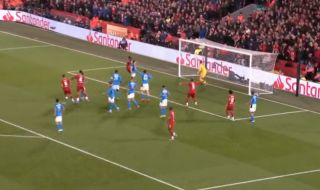 Dejan Lovren has headed home an equaliser for Liverpool against Napoli in their Champions League clash at Anfield this evening.

Watch the goal video below as the Croatian defender heads in from James Milner’s corner to make it 1-1 and cancel out the earlier opener from Napoli’s Dries Mertens.

Lovren is not usually an automatic starter for Liverpool, but has performed well recently as he’s been called in to cover for the injured Joel Matip.

Reds fans will be delighted for him to get on the score sheet tonight and he certainly deserves his moment in the limelight after being something of an unsung hero for the club down the years.