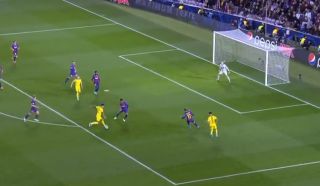 Jadon Sancho has scored a delightful goal for Borussia Dortmund as they pull one back against Barcelona in the Champions League tonight.

The England international won’t exactly be over the moon with his strike given that it is still 3-1 to Barca, but that shouldn’t take away from the individual quality of the effort.

Jadon Sancho just scored this goal against Barcelona. This man is going to be a problem for a very long time, serious talent. Baller ?? pic.twitter.com/jNvlpkO25P

Jadon Sancho has scored a sensational golazo against Barca ??pic.twitter.com/8Uzfsh7Af9

This comes amid growing talk that Sancho is unhappy at Dortmund, with the Telegraph linking him strongly with Manchester United, as well as other top clubs.

The Red Devils are said in the report to be confident they’re leading the chase for Sancho, and the 19-year-old has shown just how useful a player he could be at Old Trafford with this superb solo goal.