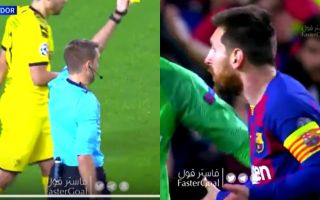 Lionel Messi got booked for diving in Barcelona’s win over Borussia Dortmund on Wednesday night.

It’s not often we see the Argentine play-acting, with his nemesis Cristiano Ronaldo perhaps having more of a reputation for resorting to the dark arts.

Still, the referee was not at all convinced by Messi here and showed him a yellow card after he went down in the box.

It’s hard to tell from the video if this was actually fair, but at the end of the day the ref’s decision is final.