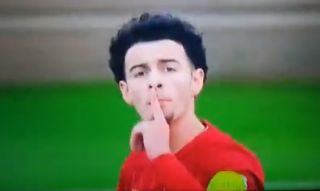 Liverpool youngster Curtis Jones was involved in a controversial moment on the pitch in today’s 7-0 thrashing of Napoli Under-19s.

The 18-year-old scored a hat-trick for the Reds youngsters, and seemed to get involved in a row with Harvey Elliott.

It seems Elliott, who joined from Fulham in the summer, wanted to take a penalty for Liverpool, though Jones ended up taking it instead.

Just watching liverpool in the UEFA youth league here an that Curtis Jones just scored a pen an running back to the half way line he tells Harvey Elliot to shut his mouth or he’ll take the next one as well the fucking top knot twat hahaha pic.twitter.com/vfTEsC3zH7

He then appears to tell Elliott to shut his mouth or he’ll take the next one!

We’re not sure Liverpool fans will want to see two of their talented young players fighting like this, though perhaps it shows a healthy competitive mentality in the squad…