Manchester United reportedly have some big transfer plans as they’re linked with some of the world’s best young talent.

The Red Devils have long been known for splashing the cash and it hasn’t always worked out well for them, with recent big-name signings like Paul Pogba, Romelu Lukaku and Alexis Sanchez proving major flops.

Still, a change in strategy could now see Man Utd go for younger players who can still improve, with the club looking prepared to once again invest big in improving their squad.

Among their targets is £100million Borussia Dortmund winger Jadon Sancho, with the Telegraph claiming United are confident they’re set to beat the likes of Liverpool to a transfer.

The England international seems an ideal fit for what United need right now after the poor form of the likes of Marcus Rashford and Jesse Lingard in attack.

Elsewhere, it seems Erling Haaland is a priority MUFC target for January in a move likely to cost around £60m.

The exciting young Norway international has been on fire in front of goal this season, scoring 26 times in 18 appearances to show he could surely be an upgrade on the misfiring Rashford.

To supply these two with ammunition up front, Kai Havertz has also apparently been approached by United about a potential £111m move to Old Trafford. 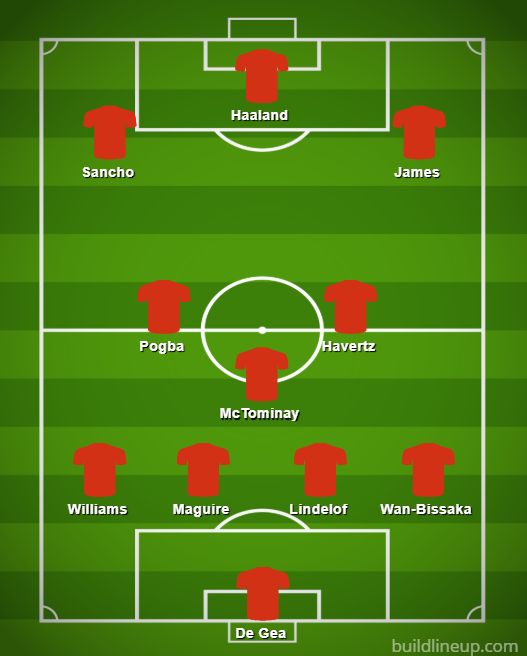 Above you can see how Ole Gunnar Solskjaer might line up with these new signings, with a 4-3-3 formation perhaps the ideal way to get the best out of them.

Havertz could be the most important addition of all, with the 20-year-old German playmaker a real all-rounder in midfield whose presence could ease the pressure on Paul Pogba.

Sancho, meanwhile, brings pace and skill out wide, which should present the lethal Haaland with plenty of chances to continue to score at a prolific rate.

MUFC have also been linked with big names like James Maddison and Timo Werner, but fans will certainly be thrilled if this trio can be snapped up as soon as possible.