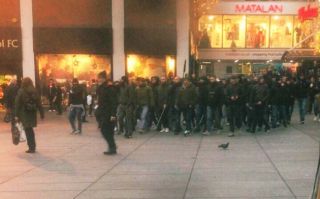 A group of Napoli fans have been spotted appearing to walk around Liverpool holding golf clubs ahead of tonight’s Champions League clash between the two clubs at Anfield.

Similarly antisocial and aggressive behaviour is not uncommon among hardcore away fans travelling around Europe, whether from England, Italy or elsewhere.

Still, this is an alarming image and suggests there’s a chance of things getting really ugly in Liverpool tonight.

No one wants to see people getting hurt or even being made to feel unsafe, and one has to hope things are not entirely as they seem in this image above.

One imagines police will also be on hand to try to keep a handle on things if tensions appear to escalate.