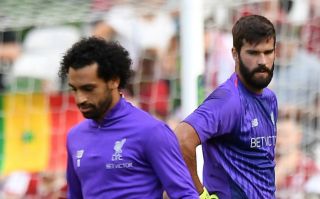 Liverpool goalkeeper Alisson said that Napoli were interested in signing him before he came at Anfield.

The Brazilian international arrived at Merseyside last summer after a two-year-spell in Roma during which, he kept 26 clean sheets in 64 matches across all competitions. Alisson said that Napoli were interested in signing him but he was committed on joining Liverpool.

Speaking to the Independent, the 27-year-old said: “Napoli tried to bid for me. The president came to me, but if I went to Naples from Roma, I was going to put myself in a tough situation in Italy. It’s not an official derby, but there’s a big rivalry between the teams. I admire Napoli a lot, they have a top squad and it’s always hard to play against them, especially when they are at home. But I was committed to joining Liverpool.”

In his very first season at Liverpool, Alisson won the Champions League and won the Premier League Golden Glove. He also won several individual accolades for his performances that included being adjudged UEFA Goalkeeper of the Year and the Best FIFA Goalkeeper. Hence, it turns out Alisson made the right choice by joining Liverpool. So far, the 27-year-old has kept 28 clean sheets in 60 appearances across all competitions.

Alisson is yet to keep a clean sheet this season and will hope to do that in tonight’s fixture against Napoli at Anfield. A win will see Liverpool seal their spot in the last 16 of the Champions League.