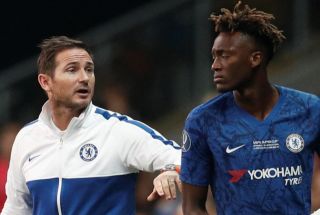 Chelsea striker Tammy Abraham has urged his team to pick themselves up and produce their finest performance to win tonight’s fixture against Valencia.

After losing 2-1 to Manchester City last weekend, the Blues play a crucial fixture against the La Liga side and a win could potentially seal their place in the last 16 of the Champions League.

SEE MORE: “He will be successful”- Chelsea legend backs Lampard to do well at the club

Abraham feels that tonight’s fixture against Valencia is Chelsea’s biggest game of the season so far. As quoted by Goal.com, the 22-year-old striker told in a news conference: “We know this is our biggest game of the season so far. Training hasn’t been different, we have all been enjoying it, we have been focused. We have to pick ourselves up after the Manchester City defeat and we know we have to give our best performance to win.

“Before Valencia, some of us were warming up together and it didn’t feel real. We were in the Championship before. The little details need to be there, and Wednesday is a massive game. Leave it all on the pitch. For many of us, [playing in the Champions League] is a dream come true. We don’t want to stop now. We have to keep pushing. You have to improve.”

Valencia beat Chelsea at Stamford Bridge back in September and haven’t lost a single home fixture since losing 0-3 to Ajax last month. Hence, it will be hard for Frank Lampard’s side to win tonight. However, given their current form, it won’t be much of a surprise if Chelsea secure all three points at the Mestalla Stadium.

Ex-Tottenham manager and specialist in failure, Jose Mourinho, is quids in again as latest payout will see him past the £50m mark
More Stories Tammy Abraham