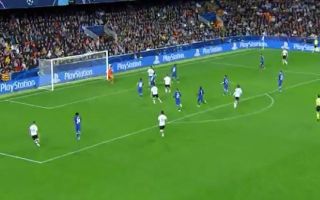 It’s always hard to tell if these types of goals should be blamed on the keeper or not. It looks like an attempt at a cross and from some angles it looks like there’s nothing that Kepa can do.

Then there’s the other view that he needs to stand up taller and intercept the ball before it goes over his head. If the Valencia player means it then it’s a fantastic goal, but it does look like a wayward cross that got lucky:

WASS WHAT A GOAL pic.twitter.com/7jKzxIFFdX

It’s a shame for Kepa because it looked like he would be the hero after saving a penalty a few minutes before. These fans took to Twitter to point the finger at the Chelsea keeper:

i feel like if kepa reached for that ball it won’t go in. why retract your hand https://t.co/wKpct6LUSb

Kepa is the worst Keeper in the Champions League

All the clubs know shoot high on Kepa and there’s a good chance you will score…..

Only Daniel Wass will know if he actually meant to score from that, while Kepa is the best person to say if he should’ve done better or not.

Either way it certainly looks like he’s going to get blamed by a section of the fans.