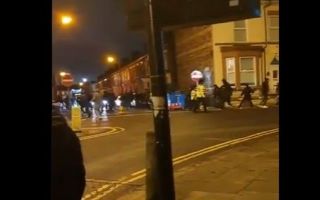 We’ve seen some pretty disgraceful scenes with Italian fans in their European trips so far this season.

We had the Lazio fans doing Nazi salutes as they marched through the streets of Glasgow, while some Napoli fans were spotted in the centre of Liverpool with golf clubs.

READ MORE: (Photo) Some Napoli fans spotted appearing to walk around Liverpool with golf clubs ahead of Champions League clash

It now looks like they’ve been scrapping with police ahead of tonight’s game as well:

It does make you wonder if these “fans” actually have any interest in football or just use it as a cover so they can travel around Europe to try and fight with people.

Either way, it’s a pretty terrible look for the clubs involved.