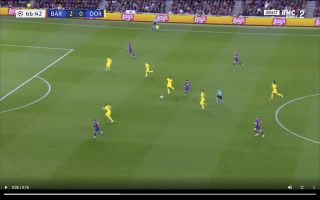 In the 66th minute of this evening’s Champions League clash between Barcelona and Borussia Dortmund, five-time Ballon d’Or winner Lionel Messi tricked his way past Manuel Akanji before playing a lovely pass.

The Argentinean played the ball into Antoine Griezmann’s path with a pinpoint through ball.

Griezmann remained cool, calm and composed enough to tuck the ball away into the bottom corner with a perfect left-footed finish.

Take a look at the Frenchman’s strike below, courtesy of beIN Sports and RMC Sport 2:

Goal of the third Barcelona "Griezmann"

After a relatively slow start to life at Barcelona (for Griezmann’s standards), a first goal in the Champions League could be exactly what the Frenchman needs to really get going for the Blaugrana.

Barcelona will be extremely difficult to stop in the Champions League when their front three are on fire like they are tonight.