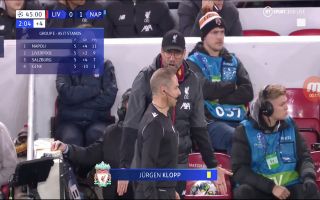 Liverpool manager Jurgen Klopp got himself in the referee’s bad book during the first-half of the Reds’ Champions League clash with Napoli this evening.

Klopp seemed furious after the referee decided against awarding a foul after a tough challenge on Sadio Mane.

The German was shouting towards Carlos Del Cerro Grande and he eventually was shown a yellow card for his apparent misdemeanours.

The Reds boss continued to vent towards the linesman before calming down.

Check out Klopp’s angry reaction below, courtesy of BT Sport:

Do you think Klopp’s reaction warranted a yellow card or do you think the referee was wrong to caution the former Borussia Dortmund boss?