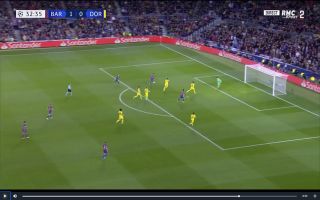 In the 32nd minute of this evening’s Champions League clash between Barcelona and Borussia Dortmund, Germany international Mats Hummels made a horrific error by passing the ball straight to Frenkie de Jong.

The Dutchman quickly laid the ball off to Lionel Messi, the Argentinean then tricked Dortmund’s defence by playing a lovely one-two with Luis Suarez.

The 32-year-old then rifled the ball into the bottom corner.

Take a look at the five-time Ballon d’Or winner’s goal below: